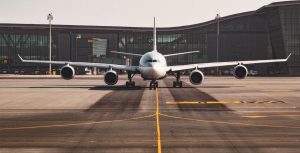 When anxiously awaiting a much-needed vacation or a reunion with long-distance loved ones, it’s hard to imagine anything worse than a delayed flight. The urgent excitement and ready availability of traveling abroad often render the confounding reality of air travel taken for granted. Not to sound like your Aunt Brenda, but a delayed arrival should be the least of your worries when it comes to all that could go wrong on a flight. It’s actually amazing that simply being late is the number one complaint we have as humans staking a claim on the sky as if we belong there. Just like there are rules on the road, there are rules in the sky. But taking off on a jet is a little more complicated than peeling out in your Sonata.

ATC: The first of many acronyms

On any given day, there are approximately 50,000 airplanes making journeys through the sky, with somewhere around 5,000 at a time during busy hours. This fact is mind-blowing considering how rare it is to see more than one or two other flights passing when looking out from the ever-coveted window seat. If you’re on a shorter flight, chances are you won’t even see a fellow aircraft at all. The distance between traveling planes is a safety persuasion monitored by… you guessed it: air traffic controllers.

Each type of plane has different rules for how high it can fly, and close it can get to other aircraft. For example, commercial aircraft flying below 29,000 feet must maintain a vertical separation of 1,000 feet. Air traffic controllers help pilots maintain these distances during the entire journey, which consists of preflight, takeoff, departure, en route, descent, approach, and landing.

To help keep track of everything, the United States has divided its airspace into 21 different zones, also called centers, that are each further divided into sectors. In addition to sectors, each zone contains portions of airspace called TRACON. Within each TRACON, there are a number of airports, each with its own designated airspace. So, remember: Zone/Center > Sector > TRACON > Airport.

A Quick Guide to ATC Divisions:

Here are a few acronyms that are important when breaking down the workings of air traffic control. These divisions are a sort of hierarchy for the various aspects of safe air travel, and play a huge part in the safe journey of every flight ever… no big deal.

FAA: The Federal Aviation Administration runs the air traffic control system and all of its divisions.

ATCSCC: The Air Traffic Control System Command Center is the division of the FAA that ​​oversees all air traffic control. It also manages air traffic control within centers where there are problems such as bad weather, traffic overloads, inoperative runways.

ARTCC: Each center has one Air Route Traffic Control Center that manages traffic within all sectors of its center except for TRACON airspace and local-airport airspace.

TRACON: Terminal radar approach control is a portion of airspace about 50 miles in diameter that handles departing and approaching aircraft within its space.

ATCT: An Air Traffic Control Tower is located at every airport that has regularly scheduled flights. Towers handle all takeoff, landing, and ground traffic.

FSS: A Flight Service Station provides information such as weather, route, terrain, and flight plans for private pilots flying in and out of small airports and rural areas. It assists pilots in emergencies and coordinates search-and-rescue operations for missing or overdue aircraft.

Congrats if you actually read through all of that! It’s ok if you checked out there for a sec… we did too. And those were just broad definitions of what each division is in charge of overseeing! Air traffic control is a very intricate operation, and if we get any more detailed at this point it’s gonna get really boring. Just know that there are hundreds of acronyms that thousands of people have put time into understanding so that you can be safe on your escape to Bora Bora.

A Day in the Life of an Air Traffic Controller

As airports don’t really follow typical business hours, air traffic control facilities operate 24 hours per day– that’s all the time, non-stop. Most air traffic controllers work 40 hours per week, but it’s nothing like your typical 9 to 5. Rather than having a set schedule, they’ll often work a chaotic mix of daytime and graveyard shifts so that everyone on the team has an equal workload. That way, one person won’t get stuck working during peak travel hours every day. Being an air traffic controller is easily one of the more stressful job options available, so controllers are required to have at least nine hours of rest between shifts.

There’s so much more that goes into an air traffic controller’s day, but hopefully, this is enough to help you understand just how much work goes into making sure you are able to rest easy on your neck pillow as you venture to foreign lands.

A good reminder for us all

We all hate delayed flights. They interrupt our plans! But there’s no destination worth putting your life at risk by boarding a plane in less than ideal conditions. We all hate having to stop at a traffic light while driving through the city, but we understand not doing so could be fatal. Let’s all remember that for the most part, flight delays and other inconveniences while traveling by plane are for our own safety. So let’s collectively agree to take a chill pill the next time we find out we’re gonna get to Disneyland a few hours late.

What’s next for ATC?

If you hadn’t noticed, the sky is massive. Even with tens of thousands of flights per day, there is still a lot of ground air to cover when it comes to reaching the full potential of air transportation and the use of airspace in general. While a portion of the sky is being used for commercial flights and larger shipments, there is still so much unclaimed aerospace just waiting to be used.

Imagine a world with more space on the ground thanks to services that have moved to the sky. Ordering things like food, medication, or even basic household items is just the beginning of what we could uncover with continual advances in air traffic management. Air traffic controllers could very well be a more common occupation as we continue to pioneer into the frontier of the sky.

5 Myths About Drones and Automated Vehicles